A Letter from Pierre Y. Leroy

In response to comments made by Fred Leviseur's letter of 1945

I happen to be one of the children of Emile-André Leroy, the sculptor, and therefore one of the grandchildren of Emile Leroy, owner of Biscuiterie Leroy. I was born on December 31. 1942. I have 2 brothers, born in 1940 and 1941. A sister joined us in 1949. 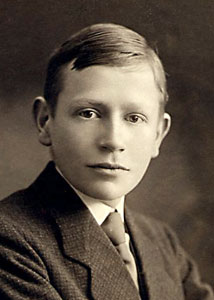 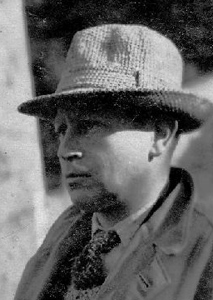 Let me tell you a few things relating to this period, about my parents.

At the end of 1942, a certain Colonel Bertand who was in charge of the 1st RI (First Infantry Regiment) and chief of the local resistance, remitted three regiment flags to my parents, so that the flags would not be "captured" by the German. These flags were placed by my mother inside of traditional Morocco leather cushions, (in replacement of the original cushioning stuff), and I spent the first months of my life laying on the flags, which were always carried with us! Needless to say that, if the German had found the flags, I would probably not be writing this mail! We kept the flags until early 1945.

This is acknowledged by a few documents I am attaching :

- a first letter of colonel Bertrand, dated Jan 1, 1945 to my grandfather, mentioning an incident during the "collection" of one of the flags by an officer who was apparently not duly appointed to do so, and giving instructions for the collection of another flag so that a new incident would not occur again.
- a second letter of colonel Bertrand, dated Jan 19, 1945 to my father confirms the collection of this other flag and asks my father to finish the commemorative monument of the 1st RI by spring time.
- a letter from the Ministry of Army, which is quite explicit. FYI, Mr Gibeau was a farmer, friend of my father, who helped and took care of Bertrand's wife, while she was clandestinely staying in my parent's "country house" located approx. 15 miles from St Amand.

As regards my father as a sculptor, I could tell you a lot about him: For instance that several of his sculptures have been acquired by French National museums, including the museum of modern art in Paris; He obtained many prizes, medals, and other awards and recognition. An exhibition on my father's work was also held at the musée St Vic in 1996-1997. Several things belong to the museum and are usually exhibited. Also there are two large sculptures which represent a farmer and a smith, at the mairie of St Amand.

A book on Africanism is presently being written, which includes a biography of my father and a presentation of his work, since he spent several years in Morocco and the French colonies (Africa, Guadeloupe), before the second war and realized many ethnographic sculptures.

Of course nobody knows how Fred Leviseur was brought to talk in that way about my father, but as you can now understand, the information or impression he got was obviously wrong. But maybe not too surprising, once you understand the "climate" prevailing at this time in the country, and particularly on the demarcation line which [divided] it in two parts.

We have good reasons to believe that we have a photograph of John Garvey, taken in my grandfather's house, (by the canal), and an American watch which may have been Garvey's watch..before it was given to my grandfather! 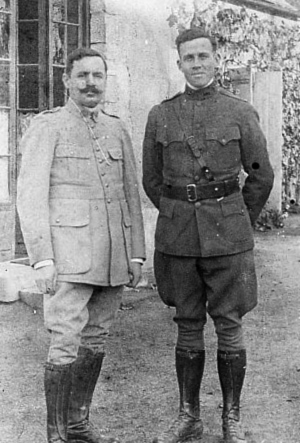 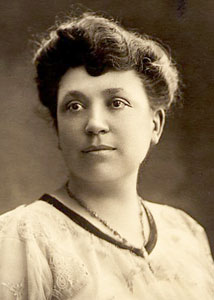 Emile Leroy and John Garvey circa 1918. On the right is Emile's wife Aline.

FYI, we still owe this family house, in which my mother (aged 97) is presently living.